Overthinking as a Hyperlinker: the Scenario Flood

We, hyperlinkers, tend to be overthinkers. Big time. Now why’s that?

In truth, you’ll find that most people are overthinkers in situations where they’re not confident about their ability to deal with the unexpected. They tend to overprepare in their heads, coming up with potential scenarios and how they would act in those, basically attempting to minimize their mental workload if the situation actually arises and they need to promptly respond the right way. 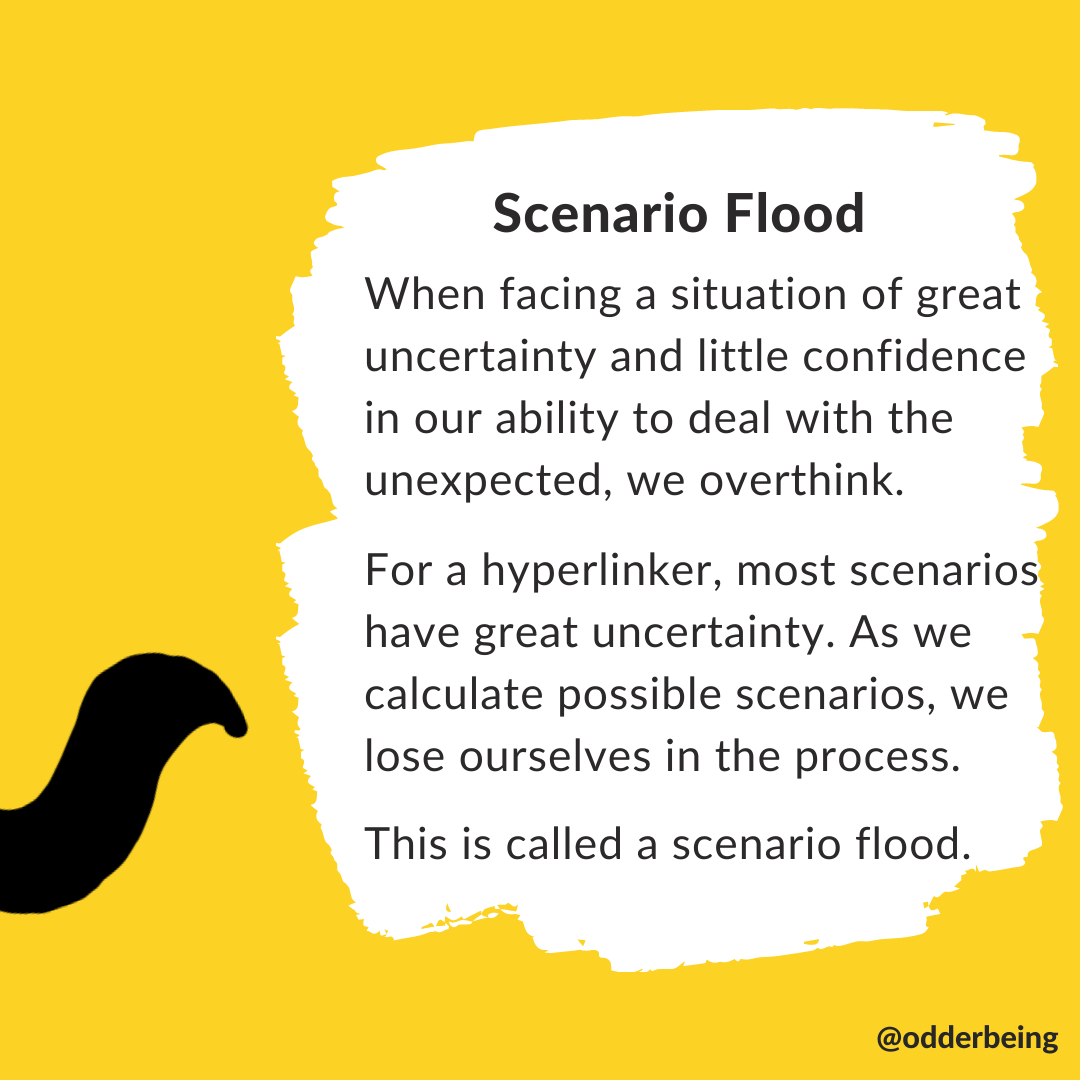 Some people are generally confident about their ability to deal with the unexpected. Some people worry about pretty much any unforeseen scenario (regardless of how skilled they actually are in managing said scenario). This last type of behavior, where you try to overprepare for everything life might throw your way is what we know as anxiety.

Why are hyperlinkers often anxious?

Hyperlinkers, more than the rest of the world, rely on the logical connections in their mental models. This means that we have a strong (although often subconscious, and not always just) belief that we can analyze their way out of pretty much anything.

On top of that, hyperlinkers are usually very imaginative. Everyone overthinks in a situation of great uncertainty and low confidence. But for hyperlinkers, most situations are situations of great uncertainty. That’s because we understand (once again, subconsciously) that any situation is influenced by many different factors (our favorite cause-effect relationships in their full glory).

However, if we merely look at the present, our information about the future is still very limited. That, of course, is because the now-future relationship is not immediate – there is a timespan in between where many things can happen, meaning many new factors can come into play.

It’s too much: the scenario flood

As we try analyzing the cause-effect relationships, we try to prepare for anything that might influence the eventual outcome. You may imagine how there are many things that can play a part. What happens next is a bit similar to what you’d see in a chess computer. The chess computer determines the best next move by calculating the possible outcomes of every move. However, as every move leads to endless counter moves, which in turn lead to endless new moves, it becomes near impossible to calculate all possible outcomes, especially for a human brain.

That’s why – especially in situations with great uncertainty or unpredictability and low confidence – hyperlinkers get lost in their minds as we try to analyze the many scenarios our mind identifies. This process is essentially a scenario flood.

(Since few things are as unpredictable as human emotion and interaction, you probably won’t be surprised if I tell you the amount of possible factors to take into account approaches infinity, which is why many hyperlinkers struggle with social anxiety.)

If you don’t put a stop to the mind coming up with an increasing amount of new scenarios, you’ll find your brain ends up in an endless spiral, exhausting you in the process.

In order for a hyperlinker (or anyone, really) to stop overthinking, we need to focus on our own confidence – the confidence in our ability to overcome potentially hazardous emerging scenarios. In doing so, we no longer need to calculate our best move and can free up our brain activity for other tasks, such as being in the moment.

Define what is right for YOU