Is Hyperlinking different from ADHD/ASD (autism)?

When I talk to people about hyperlinking sometimes they go “Oh, but isn’t what you describe autism?” or “Hey, that sounds like ADHD!” I can totally see why they would think that, so in this blog I want to tackle how autism and ADHD and hyperlinking are similar and how they are different. 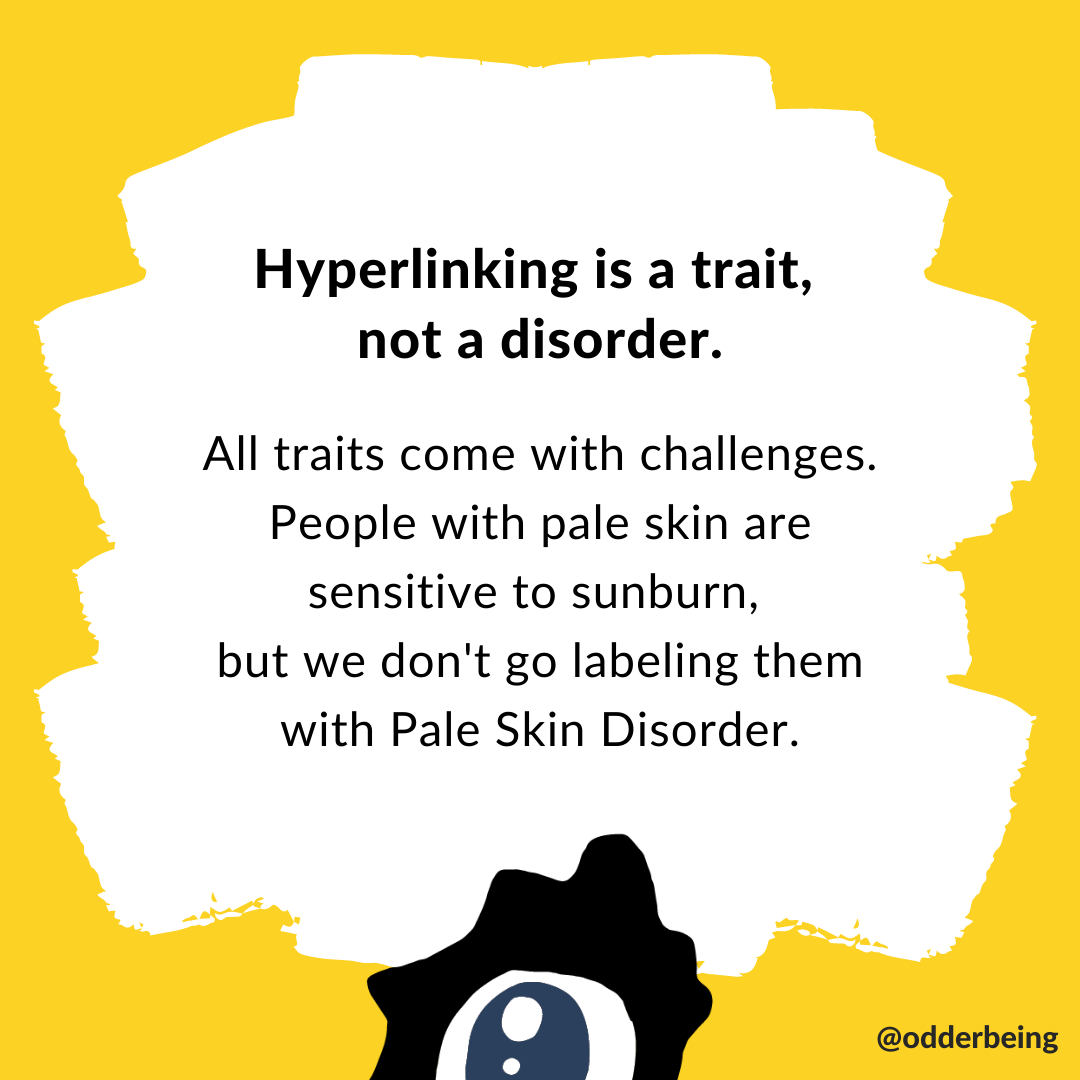 As such, you can view hyperlinking as a range in the neurodiversity spectrum – it’s one of the ways a brain can be wired for absorbing and processing information.

(Disclaimer – I’m not actually a neuroscientist, so the brain wiring thing is a hypothesis, but since psychologists are capable of diagnosing ADHD and ASD/autism based on outside behavior, ‘symptoms’, I don’t see why we shouldn’t be able to use the same deduction for hyperlinking.)

ADHD and ASD are also claimed to be on the neurodiversity spectrum. Then again, to use the words of Megan Kent, if such a spectrum exists “we are ALL on the spectrum, that’s why it’s called a spectrum!”

When we look at the behavior that comes with being a hyperlinker or being diagnosed with ADHD, there are similarities.

For one, when you look at the symptoms required to be diagnosed with ADHD, half of them fall into the ‘inattentiveness’ category, such as ‘making careless mistake, for instance in schoolwork’. This is something many hyperlinkers will likely relate to. This type of behavior for hyperlinkers is a direct consequence of being able to spot patterns, and – if you know what to look for – it’s possible to learn to deal with these issues.

Hyperactivity is not specifically related to being a hyperlinker, despite the word ‘hyper’ (‘hyper’ in hyperlinking merely means that the linking happens at a high speed).

Saying something useful about autism is even harder, because the symptoms are so many, most of them falling under lack of empathy, social ineptness, sensitivity to stimuli, hyperfocus and need for structure.

Hyperlinking may lead to some of the behaviors associated with ASD. For instance, strong reliance on the available mental model might cause hyperlinkers to struggle with new input that not yet has a place in this model. The excessive processing (each bit of new input is linked to many others) might make it overwhelming if lots of new information is presented, leading to overstimulation.

This is not to say that hyperlinkers can’t be diagnosed with ADHD or ASD, or the other way around – that people who are diagnosed aren’t hyperlinkers. As ADHD, ASD is diagnosed based on behavior, symptoms, without clear underlying causes. I suspect that many hyperlinkers are mistakenly diagnosed as either ASD or ADHD because of a lack of understanding of their brain markup.

Hyperlinking is not ‘HD’

There are plenty of ways to view ADHD and ASD, but whatever way you choose, the language remains the same. ADHD stands for Attention Deficit Hyperactivity Disorder. ASD stands for Autism Spectrum Disorder. In both cases, the word ‘disorder’ implies: something that’s not right. Something that is wrong with you.

Now I’m not here to argue that there’s nothing ‘wrong’ with people who are labeled with ADHD or ASD. I know that some wear these labels as a badge of honor while others appreciate how the labels acknowledge their struggles and do consider that there’s something wrong. On top of that, ASD especially has the word ‘spectrum’ for a reason – people diagnosed with ASD face struggles that vary so greatly that in my opinion the label loses its value. Either way, I digress. The point I want to make is…

Of course, as with any trait, hyperlinking too has its advantages and also its challenges.

This still doesn’t make it a disorder, in the same way that having a pale skin that’s prone to sunburn doesn’t mean you have a ‘pale skin disorder’.

Understanding the specifics of the traits makes it possible for a hyperlinker to choose a lifestyle that complements the talents, while either avoiding the challenges or developing good strategies to overcome them.

Sources on ADHD and ASD

← Hyperlinker Talents Anxiety in Hyperlinkers Explained: the Trap of the Scenario Flood →

Define what is right for YOU